A team of researchers with Sylvester Comprehensive Cancer Center at the University of Miami Miller School of Medicine has identified a new cellular oxygen-sensing pathway – a discovery that could potentially lead to new approaches for treating cancer and other diseases. 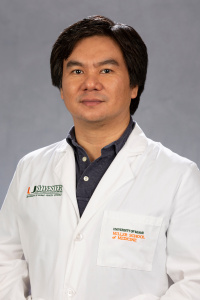 March 28, 2022 – “Turning oxygen into energy is essential for all animals, plants and fungi, as well as other eukaryotes whose cells have functional mitochondria, the so-called powerhouse for the cell,” said Fangliang Zhang, Ph.D., associate professor of molecular and cellular pharmacology.

Oxygen-sensing pathways allow humans and other mammals to respond to different environmental conditions, such as producing more red blood cells or turning to glucose reserves for energy when oxygen levels are low. Mutations in the genes that trigger oxygen-sensing may also be implicated in cancers of the blood and organs, according to Dr. Zhang.

One pathway involving the von Hippel–Lindau protein (pVHL) was identified in animal cells to sense the presence of oxygen, a finding that led to a 2019 Nobel Prize. However, something was missing from this picture, according to Dr. Zhang. “The initial oxygen-sensing pathway was found in mammalian cells, and several components of that pathway, such as the pVHL, exist only in animals,” he said. “We felt there should be another pathway commonly shared by animals, plants, and fungi because the need for oxygen-sensing must have evolved with the mitochondria from a very early time.”

After seven years of biochemical studies focusing on the genes that turn certain proteins on or off in the cells, the Sylvester researchers identified an alternative pathway for oxygen-sensing based on the protein arginyltransferase 1 (ATE1), which was derived from the ancestor of mitochondria going back billions of years to the early days of life on the planet.

Dr. Zhang said the Sylvester studies indicated that the two pathways, ATE1 and pVHL, appear to complement each other to a certain extent. “Animals need both because of their complex body structure, including the brain, heart, kidneys and other organs,” he said.

However, the two pathways vary in terms of genetic mutations that could be involved in cancers. “In kidney cancer, mutations in the ATE1 gene are rare, and most of the changes are in the pVHL gene,” Dr. Zhang said. “But in skin, stomach, uterus and other cancers, there are more mutations in ATE1 and its partner UBR family genes than in pVHL. We will continue to investigate these mutations and their impact on disease.”

Delray Medical Center is the First in Palm Beach and Broward Counties to Offer Aquablation Therapy, a New, Minimally Invasive, Robotic Treatment for Patients with an Enlarged Prostate