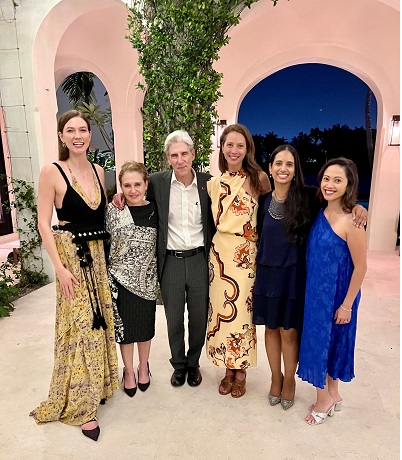 August 9, 2022 –  What began years ago as a series of voluntary workshops for students interested in obstetrics and gynecology has now become required instruction about maternal mortality for all University of Miami Miller School of Medicine students.

The two one-hour sessions not only highlight how poorly the United States does regarding maternal mortality, but also examines how disparities in access to life-saving care contribute to the problem. The student-facilitated sessions also highlight how physicians across multiple specialties can be a part of the solution.

“The original idea came from a meeting that I had with Christy Turlington Burns, founder of Every Mother Counts (EMC),” said Gauri Agarwal, M.D., associate professor of medicine and associate dean for curriculum at the Miller School. The nonprofit organization produces films that highlight the stories of women and families affected by maternal mortality worldwide.

“When I met with Christy, she was trying to develop a curriculum linked to the films,” Dr. Agarwal said. “I thought this would be an ideal partnership and linked EMC to our students. The original curriculum was spearheaded by one of our former students, Madeline Cohen, who worked with EMC, students, and several of our faculty from the Department of Obstetrics, Gynecology and Reproductive Sciences to develop the curriculum.”

The Miller School curriculum began as four small-group classes held on Zoom during the COVID-19 pandemic. The initiative focused on issues and barriers around access to maternal health care in the U.S., solutions to address disparities, and a panel discussion to share ideas. Dr. Agarwal facilitated a panel discussion, for example, that included University of Miami President Julio Frenk.

“The original curriculum was completely voluntary,” Dr. Agarwal said. “But given the fact that the U.S. does so poorly in terms of maternal mortality we felt strongly that the curriculum should be for all medical students.”

Although lack of access to maternal health care affects women around the globe, “what is sad is that we are about at the same level as many countries that have not nearly as many resources as the United States,” she said.

For example, an estimated 17.4 women died per 100,000 live births in the U.S. in 2018, according to a 2020 report from The Commonwealth Fund. At the same time, France reported 8.7 maternal deaths per 100,000 live births and Canada reported 8.6. Furthermore, Dr. Agarwal pointed out that maternal mortality rates in the U.S. have doubled over the last 20 years, with Black and Indigenous mothers two to three times more likely to die from complications of pregnancy when compared to white mothers.

Why the U.S. does so poorly “is a very challenging question,” Dr. Agarwal said. “There are no clear answers,” she added, but multiple factors likely contribute, including overall healthcare disparities, lack of universal health care and maternal healthcare specialists, lack of support for women in the workforce, and/or institutional racism.

The Miller School, with one of the largest M.D./M.P.H. degree programs in the nation, is an ideal place to raise awareness about this public health issue, Dr. Agarwal added. The University is at the forefront “training students so they can help their patients in the future.”

This educational initiative is unique, said Fatima Ali Khan, a fourth-year student in the M.D./M.P.H. program who has led the instruction. “I haven’t seen or heard about anything like this at any other institution,” she said.

Keys to its success include the small-group instruction and the peer-to-peer approach. The classes are well received, Khan said. “Each time we run the sessions, we recruit more and more students interested to serve as teacher facilitators.”

Khan also credits the mentorship from Dr. Agarwal and support from The Task Force on Racial Justice, created at the Miller School in 2020. “The Miller School really, really encourages students to take initiative.”

In terms of next steps, Dr. Agarwal and colleagues plan to publish the outcomes from these maternal mortality sessions and how they impact students after they graduate. In addition, they hope other institutions will be inspired to model their curricula to educate and empower even more medical students going forward.