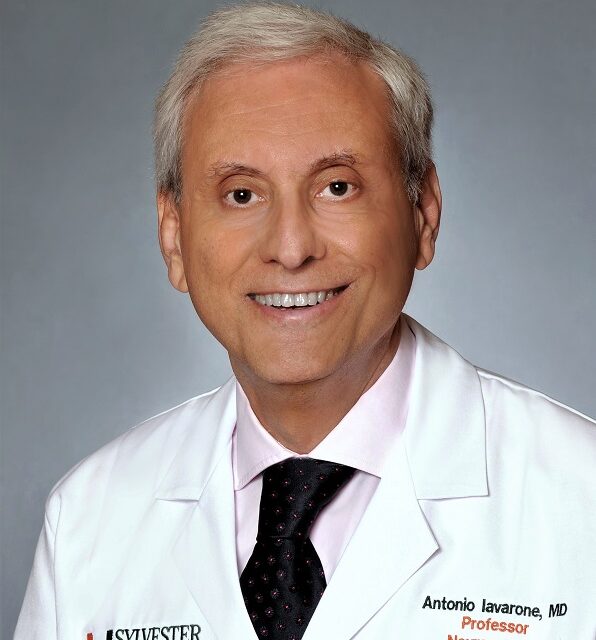 LZTR1 variants take the brakes off oncogenes and could be promising biomarkers for targeted therapies.

November 29, 2022 – Investigators at Sylvester Comprehensive Cancer Center at the University of Miami Miller School of Medicine, in collaboration with other institutions, have shown that mutated LZTR1 proteins allow EGFR and AXL oncogenes to expand unchecked in cells, leading to malignant growth. However, there may be a silver lining, as the same LZTR1 mutations could serve as biomarkers, indicating that EGFR and AXL inhibitors might be effective treatments in some patients. The study was published in Cancer Discovery, a journal from the American Association for Cancer Research.

“LZTR1 is part of a protein complex that helps chop up other, unnecessary, proteins,” said Anna Lasorella, M.D., professor of biochemistry and molecular biology at the Miller School and co-senior author on the study. “Under normal circumstances, the complex acts as a tumor suppressor, keeping EGFR and AXL under control. However, when LZTR1 is mutated, these oncogenes begin to accumulate, driving cell growth, metastasis, and therapeutic resistance.”

LZTR1 mutations play a significant role in many tumors, including lung, glioblastoma, breast, colon, esophageal, and others. In addition, inherited LZTR1 variations can cause Schwannomatosis, a rare and painful condition that allows benign tumors to grow around nerves.

In the study, the researchers explored how loss of LZTR1 function leads to such dramatic consequences. They found that, when working properly, the LZTR1-Cul3 complex designates excess EGFR, AXL, and other proteins for destruction. LZTR1 mutations disrupt this critical cellular waste management system, allowing these oncogenes to proliferate.

“Through comprehensive proteomic analyses of cells with normal and mutant LZTR1 genes, we showed that EGFR and AXL are important targets for LZTR1 for degradation,” said Aram Ko, Ph.D., first author on the study.

The researchers also found that LZTR1 loss can make tumors more vulnerable to treatment, indicating that the protein could be a valuable biomarker, distinguishing which patients might respond well to EGFR/AXL inhibition. There are a number of these inhibitors in current use and in clinical trials.

“When LZTR1 is altered, tumors become more sensitive to concurrent EGFR and AXL inhibition,” said Antonio Iavarone, M.D., deputy director of Sylvester Comprehensive Cancer Center and co-senior author on the paper. “Inhibiting both oncogenes is essential. If we knock down just one, the tumor will continue to thrive.”

The scientists look forward to expanding on these findings. The team wants to better understand if there are other cancer-driving proteins LZTR1 loss may unleash. They are also concerned about treatment resistance. Cancers often learn to escape targeted inhibitors, like the ones being used against EGFR and AXL, but more work must be done to illuminate the mechanisms that drive this resistance.

Ultimately, the team wants to collaborate with Miller School neuro-oncologists and other clinicians to develop clinical trials and explore whether EGFR/AXL inhibition helps cancer patients. The first step will be developing a biomarker test to detect LZTR1 mutations.

“We need to identify the patients who have LZTR1 alterations, because those are the people according to our study, who could benefit from EGFR/AXL inhibition,” said Dr. Lasorella. “If we treat patients who don’t have the alteration, their cancers probably won’t respond to these therapies. A test is essential.”