Genetic and clinical research reveals new type of macular dystrophy, a cause of central vision loss.

June 8 2022 – Retinal images of a patient with a TIMP3 mutation causing atypical symptoms. While there is visible damage in the retina (dark circles), there is no CNV present. NEI

Researchers from the National Eye Institute (NEI) have identified a new disease that affects the macula, a small part of the light-sensing retina needed for sharp, central vision. Scientists report their findings on the novel macular dystrophy, which is yet to be named, in JAMA Ophthalmology. NEI is part of the National Institutes of Health. 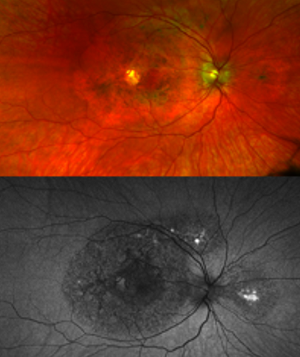 Retinal images of a patient with a TIMP3 mutation causing atypical symptoms. While there is visible damage in the retina (dark circles), there is no CNV present. NEI

Macular dystrophies are disorders that usually cause central visual loss because of mutations in several genes, including ABCA4, BEST1, PRPH2, and TIMP3.

TIMP3 is a protein that helps regulate retinal blood flow and is secreted from the retinal pigment epithelium (RPE), a layer of tissue that nourishes and supports the retina’s light-sensing photoreceptors. All TIMP3 gene mutations reported are in the mature protein after it has been “cut” from RPE cells in a process called cleavage.

“We found it surprising that two patients had TIMP3 variants not in the mature protein, but in the short signal sequence the gene uses to ‘cut’ the protein from the cells. We showed these variants prevent cleavage, causing the protein to be stuck in the cell, likely leading to retinal pigment epithelium toxicity,” said Bin Guan, Ph.D., lead author.

The research team followed these findings with clinical evaluations and genetic testing of family members to verify that the two new TIMP3 variants are connected to this atypical maculopathy.

“Affected individuals had scotomas, or blind spots, and changes in their maculas indicative of disease, but, for now, they have preserved central vision and no choroidal neovascularization, unlike typical Sorsby Fundus Dystrophy”, said Cathy Cukras, M.D., Ph.D., a Lasker tenure-track investigator and medical retina specialist who clinically evaluated the patients.

NEI’s Ophthalmic Genomics Laboratory gathers and manages specimens and diagnostic data from patients who have been recruited into multiple studies within the NEI clinical program to facilitate research of rare eye diseases, including Sorsby Fundus Dystrophy.

“Discovering novel disease mechanisms, even in known genes like TIMP3, may help patients that have been looking for the correct diagnosis, and will hopefully lead to new therapies for them,” said Rob Hufnagel, M.D., Ph.D., senior author and director of the Ophthalmic Genomics Laboratory at NEI.

The study was funded by the NEI Intramural Research Program.

The Community is LECOMs Campus 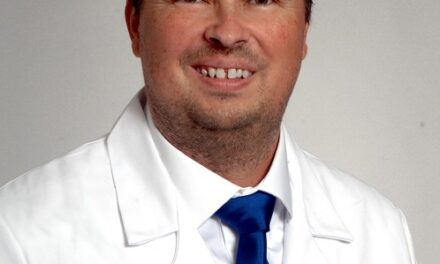 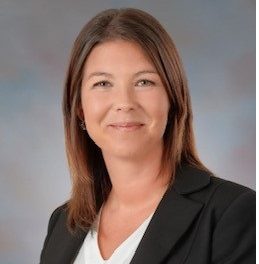