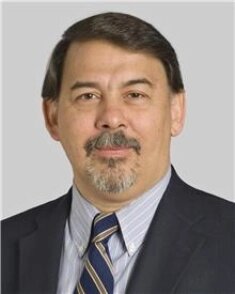 When Joe Santoro, 57, began experiencing shortness of breath and difficulty maintaining normal activity, he knew something was wrong and pursued medical advice. After having already been diagnosed with mitral valve disease eight years ago, he was informed he had atrial fibrillation and would need to undergo traditional heart surgery.

Traditional heart surgery typically involves a long and painful recovery due to the six- to eight-inch incision made through the middle of the chest, through the breastbone, so Santoro sought a second opinion from Dr. Jose Navia, Regional Director of the Cleveland Clinic Florida Heart, Vascular and Thoracic Institute and Minimally Invasive Valve Program.

Santoro shares, “After seeing Dr. Navia, I knew there were more options.” Instead of a traditional procedure, Santoro chose a robotically assisted approach to his mitral valve repair surgery, as it is much less invasive and would heal faster. Dr. Navia performed the operation using Cleveland Clinic Weston’s state-of-the-art and FDA-approved robotic surgical system, allowing the first-grade teacher and musician to return to normal activity within only three weeks. This operation involves an endoscopic, closed chest approach that repairs heart valves that are working incorrectly, often caused by valve stenosis (stiff, fused, inflexible leaflets, limiting flow of blood) or valve regurgitation (leaky heart valve, which occurs when the leaflets do not close completely).

“A robotically-assisted approach for valve repair surgery is the ultimate new use for technology,” Dr. Navia says. “This approach provides the patient with a better option to have a durable repair or replacement of the valve.”

During the minimally invasive procedure, a surgeon operates a robot from a console in an operating room that provides a high definition and magnified view of the patient’s valve. This unobstructed, 3D view provided by a high-power camera and combined with a lateral thoracic approach gives the surgeon a clear view into not only the mitral valve, but leaflets and sub-valvular structures, as well.

The surgeon uses the robot’s thin arms to mirror his own arm and wrist movements, carefully controlling the movement and placement of operating instruments to make incisions no larger than two inches that are much more precise and smaller, with less pain and less trauma for a shorter hospital stay and overall faster healing process that requires fewer pain medications. This is largely attributed to the fact that the breastbone does not need to be opened and the ribs do not have to be spread, in order to successfully perform the procedure even though the same steps as traditional heart surgery are performed, including any repair techniques or valve replacements.

Other benefits of the robotically assisted, less invasive heart valve surgery include minimal scarring, less bleeding, decreased risk of infection, and no specific activity restrictions post-surgery. Patients like Santoro can often return to work within a few days or one week after the operation.

As heart disease remains the leading cause of death for men, women, and people of most racial and ethnic groups in the United States, according to the Centers for Disease Control and Prevention, it is imperative that the public is aware of and takes the risk of heart disease seriously. Treatment for heart disease is based on a series of diagnostic tests that can determine whether an individual is an ideal candidate for robotically assisted heart valve surgery, which is dependent on the type and severity of the individual’s heart disease, age, medical history and lifestyle.

As with most other medical procedures, lifestyle changes are still strongly encouraged to ensure continued cardiovascular health. These changes can include quitting smoking, treating high cholesterol, managing blood pressure and diabetes, and participating in a cardiac rehabilitation program.

With any surgical procedure, risks do exist, such as the age of the patient, lifestyle habits, other preexisting medical conditions, and the number of procedures performed in an operation. However, overall, this technology has forever changed the way heart surgery is performed, both procedurally and with improved patient outcomes.

When It Comes to Patient Care – Tell Your Story