A luminary stroke neurologist and researcher, Ralph L. Sacco, M.D., MS, professor and chair of neurology and the Olemberg Family Chair of Neurological Disorders at the University of Miami Miller School of Medicine, has been elected to the prestigious National Academy of Medicine (NAM).
This extraordinary honor reflects the height of professional achievement and commitment to service in health and medicine. Dr. Sacco received the honor “for his instrumental involvement in policies promoting ideal cardiovascular health, brain health, stroke prevention, and non-communicable disease targets,” according to the Academy.
Dr. Sacco’s career in medicine spans more than 35 years. Following 20 years as a faculty member at Columbia University, he began his tenure at UM in 2007 and has continued to make an indelible mark on neurologic care, stroke research, disparities, translational science and medical education.

University of Miami President Julio Frenk, himself a member of the National Academy of Medicine, said, “This is an extraordinary honor, not only for Dr. Sacco, but our entire University community. It speaks to the excellence of Ralph’s clinical research and its impact on the practice of medicine nationwide. His dedication to making new discoveries that advance the field and disseminating those findings in a meaningful way are the hallmark of his stellar career.”
Membership in the NAM is considered one of the highest honors in the fields of health and medicine and recognizes individuals who have demonstrated outstanding professional achievements and commitment to service. The NAM announced the names of the 75 new members and 10 international members publicly at its annual meeting, held on October 15.
“I am very grateful to the members of the National Academy of Medicine for electing me,” said Dr. Sacco, an internationally renowned stroke neurologist and prolific researcher who serves as president of the American Academy of Neurology. He is also executive director of the Miller School’s Evelyn McKnight Brain Institute, director of UM’s Clinical & Translational Science Institute, and senior associate dean of Clinical & Translational Science. “It is an honor and privilege to join past honorees from UM and serve on the NAM recommendation panels that have had a tremendous impact on health care, education, and public health.”
Edward Abraham, M.D., executive vice president and CEO of UHealth, called Dr. Sacco “a luminary in his field. He is not only an outstanding clinician, but also an exceptional researcher who has leveraged team science to help us more clearly understand the impact of genetics, disparities, epidemiology, and prevention of stroke, which is a leading cause of disability. We congratulate him on this honor.”
Dr. Sacco serves as a professor of neurology, public health sciences, human genetics, and neurological surgery at the Miller School. He has published extensively in the areas of stroke prevention, treatment, risk factors, outcomes, disparities, and genetics. He is also chief of the neurology service at UM/Jackson Memorial Hospital.
“It means a great deal to me to have my team-based research in the fields of stroke epidemiology, prevention, genetics, and health care disparities recognized by the NAM,” said Dr. Sacco. “It is all about teamwork, and I am so grateful to the incredibly talented people I’ve had the great fortune of working with for many years.”
As a leading author of numerous evidence-based neurological and cardiac guidelines, Dr. Sacco has received many awards, including the World Stroke Organization Global Stroke Leadership Award, the Javits Award in Neuroscience from the National Institute of Neurological Disorders and Stroke, the William M. Feinberg Award for Excellence in Clinical Stroke from the American Heart Association (AHA), and the AHA Gold Heart Award. In addition, in 2010, Dr. Sacco was the first neurologist to serve as the national president of the AHA.
“Ralph is an exemplary clinical leader and researcher,” said Henri R. Ford, M.D., MHA, dean and chief academic officer of the Miller School of Medicine. “This honor recognizes his ability to lead teams in the pursuit of evidence-based science that can change the practice of medicine. Time and again, he has demonstrated new ways of approaching the prevention and treatment of stroke and advanced our knowledge on a broad scale. Our patients and students are all beneficiaries of his brilliance.”
Dr. Sacco is the principal investigator of the Northern Manhattan Study; the Florida-Puerto Rico Collaboration to Reduce Stroke Disparities; and American Stroke Association-Bugher Foundation Centers of Excellence in Stroke Collaborative Research. He is also co-investigator of multiple National Institutes of Health grants.
Besides President Frenk, Dr. Sacco joins four other University of Miami faculty as Academy members: former UM president and professor Donna E. Shalala; Margaret Pericak-Vance, Ph.D., the Dr. John T. Macdonald Foundation Professor of Human Genomics and director of the John P. Hussman Institute for Human Genomics; Diana D. Cardenas, M.D., MHA, professor emeritus; and Mary Bartlett Bunge, Ph.D., professor emeritus.
The National Academy of Medicine, established in 1970 as the Institute of Medicine, is an independent organization of eminent professionals from diverse fields including health and medicine; the natural, social, and behavioral sciences; and beyond. It serves alongside the National Academy of Sciences and the National Academy of Engineering as an adviser to the nation and the international community. Through its domestic and global initiatives, the NAM works to address critical issues in health, medicine, and related policy and inspire positive action across sectors. The NAM collaborates closely with its peer academies and other divisions within the National Academies of Sciences, Engineering, and Medicine.
Post Views: 222

Yet Another Way Dogs Help the Military; Aeromedical Patient Evacuations 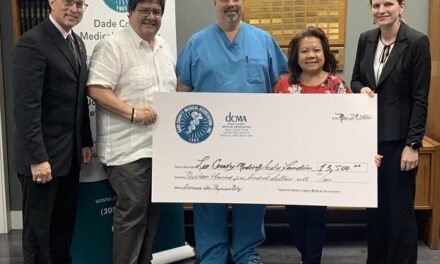