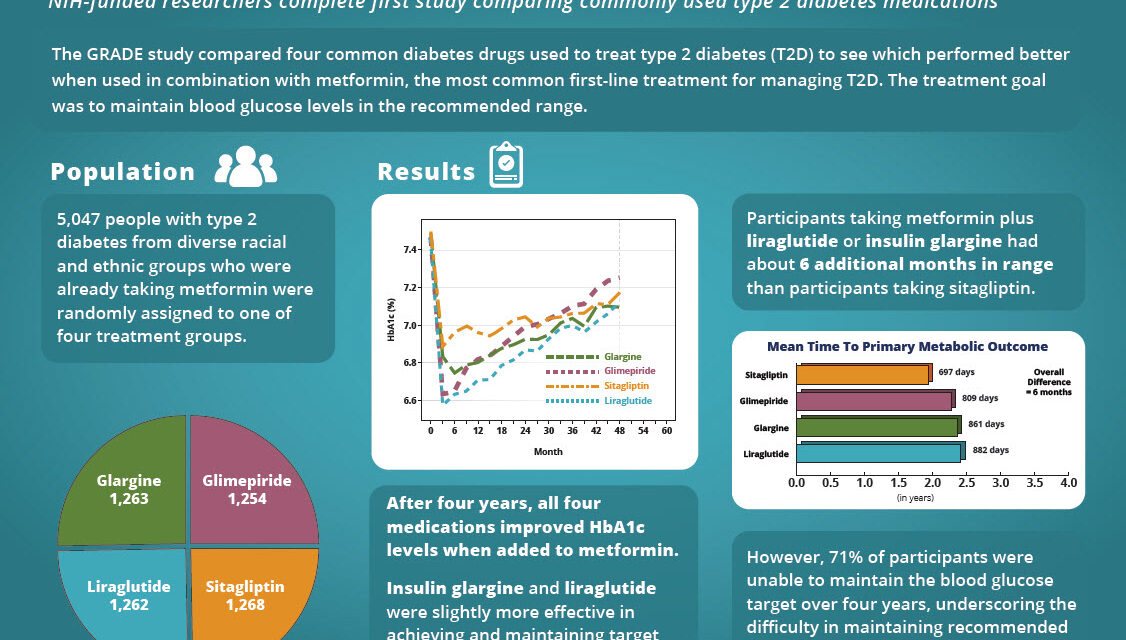 September 2022 – In a large clinical trial that directly compared four drugs commonly used to treat type 2 diabetes, researchers found that insulin glargine and liraglutide performed the best of four medications approved by the U.S. Food and Drug Administration to maintain blood glucose levels in the recommended range. Blood glucose management is a key component of keeping people with type 2 diabetes healthy. All four medications evaluated were added to treatment with metformin, which is the first-line drug to treat type 2 diabetes. The trial was funded by the National Institute of Diabetes and Digestive and Kidney Diseases (NIDDK), part of the National Institutes of Health. 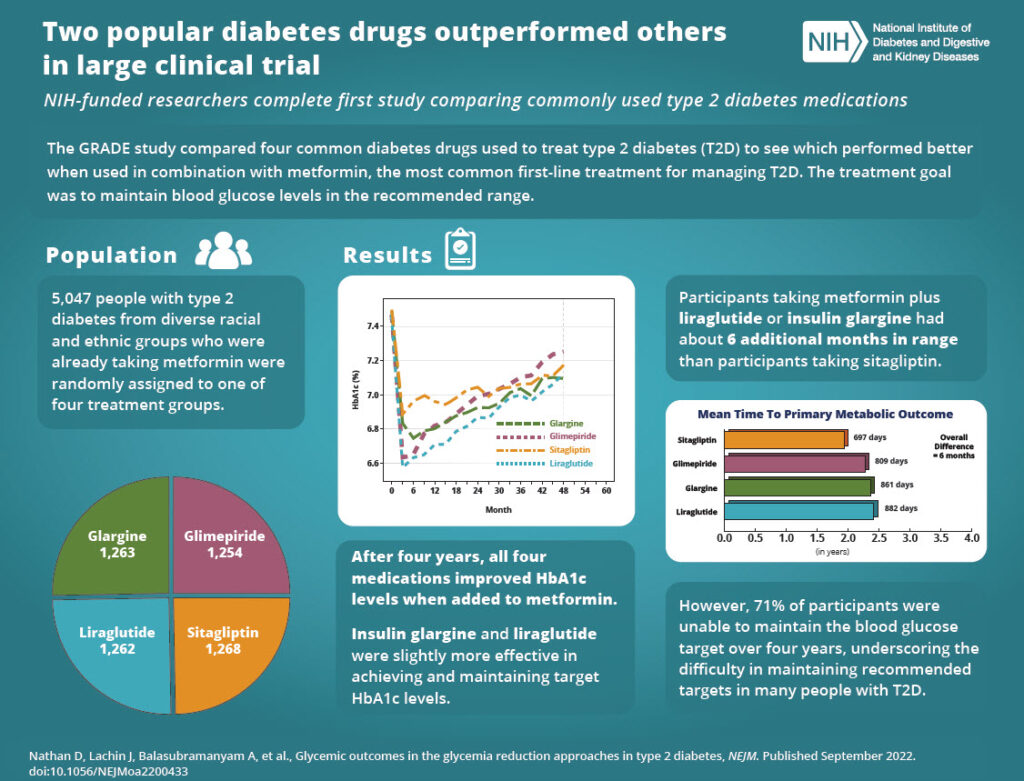 More than 37 million Americans have diabetes, and approximately 90 to 95% of them have type 2 diabetes. People with diabetes who keep their blood glucose levels in the near-normal range generally have a much lower risk of developing diabetes complications such as nerve, kidney, and eye diseases. Most people with type 2 diabetes require more than one medication to control blood sugar levels over time.

While there is general agreement among health care professionals that metformin combined with diet and exercise is the best early approach in diabetes care, there is no consensus on what to do next to best keep high blood glucose in check.

Launched in 2013, the Glycemia Reduction Approaches in Diabetes: A Comparative Effectiveness (GRADE) Study(link is external) was conducted at 36 U.S. study centers. It was designed to compare four major medications approved by the FDA at the time GRADE started to treat diabetes in combination with metformin. Major results were published in a pair of papers in The New England Journal of Medicine(link is external).

“This study was designed to provide health care providers with important information on how to guide the long-term management of type 2 diabetes,” said Dr. Henry Burch, NIDDK’s project scientist for GRADE. “This is an integral step toward precision medicine for diabetes care, as these results can now be used in the decision-making process for each individual patient in light of their levels of glucose control, how well the medications are tolerated, and the person’s other health considerations.”

The study enrolled 5,047 people with type 2 diabetes from diverse racial and ethnic groups who were already taking metformin. Participants were randomly placed into one of four treatment groups. Three groups took metformin plus a medicine that increased insulin levels, sitagliptin, liraglutide, or glimepiride. The fourth group took metformin and insulin glargine U-100, a long-acting insulin.

After an average of four years of follow-up, the study found that participants taking metformin plus liraglutide or insulin glargine achieved and maintained their target blood levels for the longest time compared to sitagliptin or glimepiride. This translated into approximately six months more time with blood glucose levels in the target range compared with sitagliptin, which was the least effective in maintaining target levels. Treatment effects did not differ based on age, sex, race, or ethnicity.

However, none of the combinations overwhelmingly outperformed the others. Although average blood sugar levels decreased during the study, nearly three quarters of all participants were unable to maintain the blood glucose target over four years, underscoring the difficulty in maintaining recommended targets in many patients with type 2 diabetes.

“GRADE effectively shows which drugs worked best at achieving and maintaining blood glucose targets over time, but we need to establish even more effective strategies for the long-term maintenance of acceptable glucose levels,” said GRADE Study Chair Dr. David M. Nathan, director of the Massachusetts General Hospital Diabetes Center, Boston. “We still have more work to do, such as evaluating other interventions and treatment combinations to help people with type 2 diabetes achieve long-term glucose control.”

The study also examined side effects of the drugs, finding:

In addition, on average, participants in all treatment groups lost weight. Over four years, people in the liraglutide and sitagliptin arms lost more weight (an average of 7 and 4 pounds, respectively) than the glargine and glimepiride arms (less than 2 pounds).

“With many treatment options available for type 2 diabetes, health care providers and patients can find it difficult to know which drug is best for which person,” said NIDDK Director Dr. Griffin P. Rodgers. “NIDDK stands uniquely poised to support comparative effectiveness trials like GRADE to help providers make evidence-based recommendations that lead to better health for their patients, and for all people living with type 2 diabetes.”

A now-available type of diabetes drug called SGLT2 inhibitors was not approved by the FDA at the launch of GRADE recruitment and was not included in the study.

The GRADE Study was supported by a grant from NIDDK (U01DK098246). Additional support was provided by the National Heart, Lung, and Blood Institute; National Institute of General Medical Sciences; National Center for Advancing Translational Sciences; the Centers for Disease Control and Prevention; and the American Diabetes Association. The Department of Veterans Affairs provided resources and facilities. Material support in the form of donated medications and supplies has been provided by Becton, Dickinson and Company, Bristol-Myers Squibb, Merck & Co., Inc., Novo Nordisk, Roche Diagnostics, and Sanofi. ClinicalTrials.gov number: NCT01794143.

The NIDDK, part of the NIH, conducts and supports basic and clinical research and research training on some of the most common, severe, and disabling conditions affecting Americans. The Institute’s research interests include diabetes and other endocrine and metabolic diseases; digestive diseases, nutrition, and obesity; and kidney, urologic, and hematologic diseases. For more information, visit https://www.niddk.nih.gov/.